The role of the biological clock in cartilage formation 20. Sep. 2022 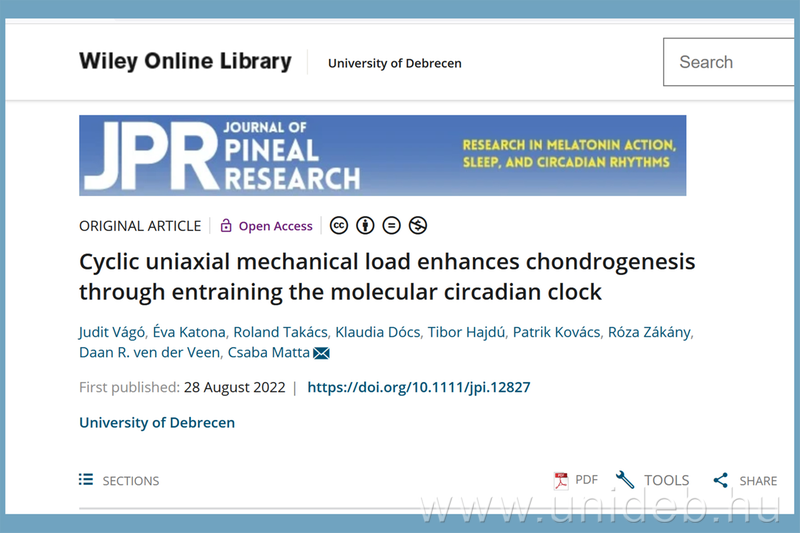 In the article, it is reported that certain mechanical stimuli (for example, early fetal movements) are necessary for the healthy development of the cartilage tissue present in our joints, which exert their positive effect partly by synchronizing the biological clock of the developing cartilage cells.

“Cartilage wear and tear (arthrosis), which is one of the most widespread diseases of our time, and the advanced stage of joint inflammation (osteoarthritis) that develops either independently or as a consequence of constitute a progressive and currently incurable disease causing almost unbearable pain. This is exactly why it is extremely important to map up the pathological processes at the molecular level, which can contribute to the development of new types of treatments and to the fine-tuning of already existing therapies,” said the head of the research project, Csaba Matta.

An assistant professor of Debreceni Egyetem ÁOK Anatómiai, Szövet- és Fejlődéstani Intézet [Department of Anatomy, Histology and Embriology, Faculty of Medicine, University of Debrecen], Csaba Matta added that one of the methods aimed at restoring damaged cartilage tissue is based on the implantation of undifferentiated stem cells. However, most often, these stem cells do not end up forming the original vitreous cartilage (hyaline cartilage) but fibrocartilage instead, which has less favorable biomechanical properties. For this reason, it would be essential to arrive at a more precise understanding of the molecular processes governing the formation of hyaline cartilage. In the recently published article, the authors discuss a particularly exciting, new aspect of cartilage tissue biology.

The daily rhythm of living beings (circadian rhythm) is regulated by the central clock located in the hypothalamus as well as by molecular clocks present on the peripheries, i.e., in all of our tissues and cells, including mature chondrocytes. The molecular clock works through a complex and mutually stimulating and inhibiting interaction of clock genes and clock proteins. Malfunctions in the synchronicity of the circadian clock can result in a number of diseases (for example, cardiovascular diseases, obesity and several psychological disorders). It has already been established that damage to one of the key genes of the molecular clock can cause arthritic changes in mature chondrocytes. Nevertheless, the exact nature of this mechanism is not yet clear to us.

“The functioning of the molecular clock during cartilage development has not yet been investigated. In order to understand the regulation of the internal circadian rhythm of cartilage cells and the process of how the disruption of the rhythmicity of the clock can contribute to the development of arthritis, we must first map up the part played by the molecular clock in the formation of cartilage tissue,” said Csaba Matta to hirek.unideb.hu. 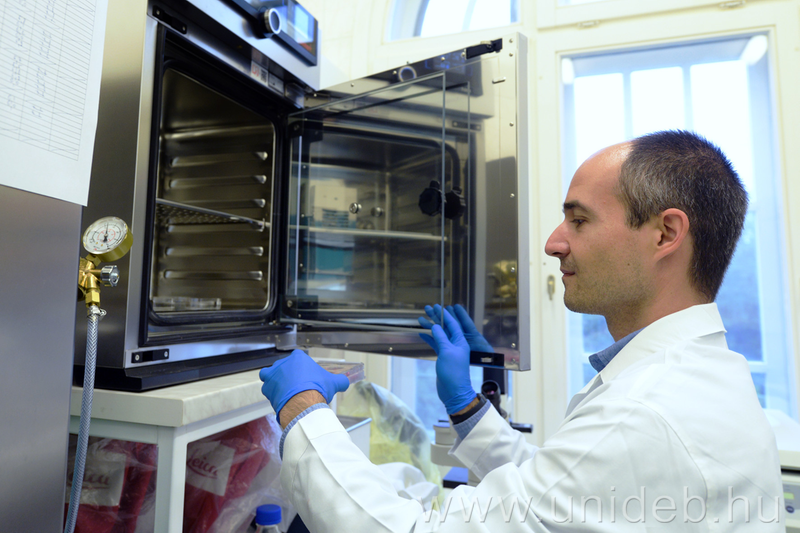 The head of the research project emphasized that, although the central clock is synchronized primarily by the light stimuli coming from the retina (prompted by the alternation of days and nights), this cannot be considered relevant in developing joints. Therefore, the hypothetical premise assumed was that mechanical stimuli resulting from fetal movements could be responsible for the signals that synchronize the components of the molecular clock.

“The research team has managed to prove this truly novel assumption. The experiments were performed in cartilaginous cell cultures produced from the limb colonies of 4-day-old chicken embryos, after mechanical stimulation. Compared to the control cultures, the rhythmic expression of clock genes was clearly visible in the mechanically stimulated cultures. This rhythmic pattern was also detectable in the expression of the genes controlling cartilage development,” said Csaba Matta.

Thus, the researchers of the University of Debrecen were indeed the first to describe that mechanical stimuli, at least partly, exert their effect promoting cartilage formation by synchronizing the circadian clock of the developing cartilage cells. Based on their findings, they concluded that cell-based therapeutic procedures could be supplemented in the future in the case of arthritis or arthrosis, so common in old age. They also hope that, by “pre-stimulating” the stem cells that are to be implanted with appropriate mechanical stimulation, more effective cartilage regeneration can be achieved.