Successful Cooperation with our Polish Counterparts

In recent days, Krzysztof Morawski has performed cochlear implant surgeries at the Department of Otorhinolaryngology and Head and Neck Surgery of the UD. His activity has now been recognised by Rector Zoltán Szilvássy by decorating him with the most prestigious award of the university.

Krzysztof Morawski placed seven cochlear implants - electrical medical devices used in people with severe hearing impairment and hearing loss bordering on deafness- in three children with severe hearing loss and one adult in two days at the Department of Otorhinolaryngology and Head and Neck Surgery at the University of Debrecen at the end of June. The youngest patient was one and a half years old and the oldest was 68 years old. The Polish professor has performed more than 400 such surgeries during his career. 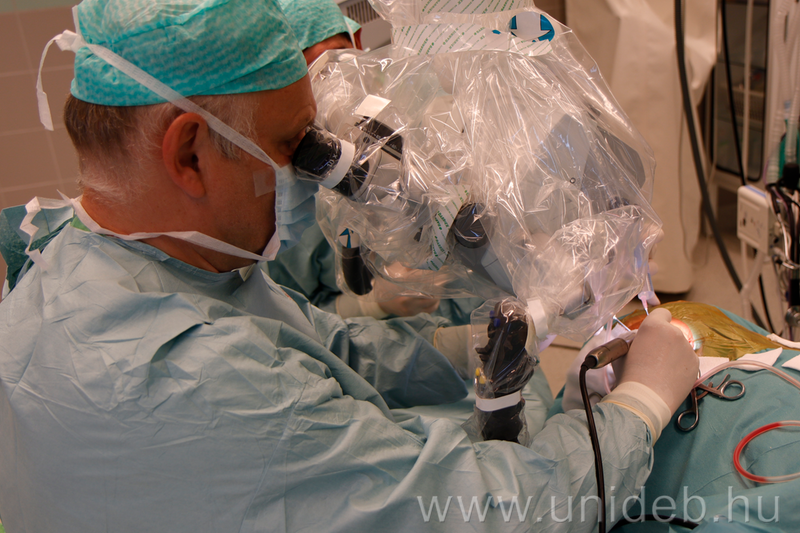 - Due to engineering work, implants are becoming increasingly advanced and smaller thanks to engineering work. While in the 1950s and 60s patients carried a box in their pocket and wires led to their ears, today these devices are so small that their external unit is almost invisible. This significantly facilitates the everyday life and social integration of patients. Further, it is very important to emphasize that while the old devices improved hearing, the current ones perfectly restore it, thus they are much more technically advanced than before, Krzysztof Morawski told hirek.unideb.hu.

The device consists of an external and an implanted internal part. The external part is a combination of a speech processor behind the ear and a cable leading to the antenna. The internal part is a receiver that is surgically placed under the skin. The receiver also has an electrode that is fed into the cochlea. The implant converts sounds into electrical signals that lead directly to the auditory nerve. This makes it possible to get around the damaged parts of the ear. 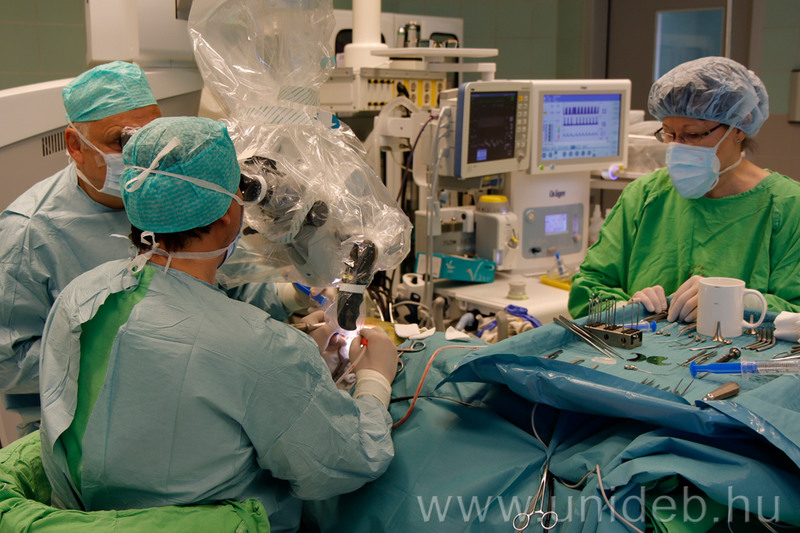 The cochlear implantation program was launched at the University of Debrecen in 2000. Since then, about 80 such surgeries have been performed at the clinic. Cooperation with Oticon Medical, a distributor of the new types of implants, began in 2017. Polish specialists have since performed several surgeries in Debrecen within the framework of that cooperation.

- Our joint work is very effective; we can learn a lot from Polish doctors, as they have already performed hundreds of such surgeries. Surgical accuracy is very important, as millimetres also count here, and it does matter how long it takes to perform the surgery, how long we anesthetize a child. With a sure-handed surgeon, the chances of developing complications are also very small - emphasized Judit Szilvássy, director of the Department of Otorhinolaryngology and Head and Neck Surgery at the University of Debrecen.

At the same time, the associate professor of the University of Debrecen added that excellent surgical work is not sufficient in the case of cochlear implantation, a team of several specialists works for joint success. An audiologist’s work is important as they select the patient suitable for the procedure and then the otorhinolaryngologist performs the necessary examinations and analyzes the results. After the operation, an IT specialist’s big role is set the device, and then a special education teacher, the speech therapist, helps the patient with learning to speak. 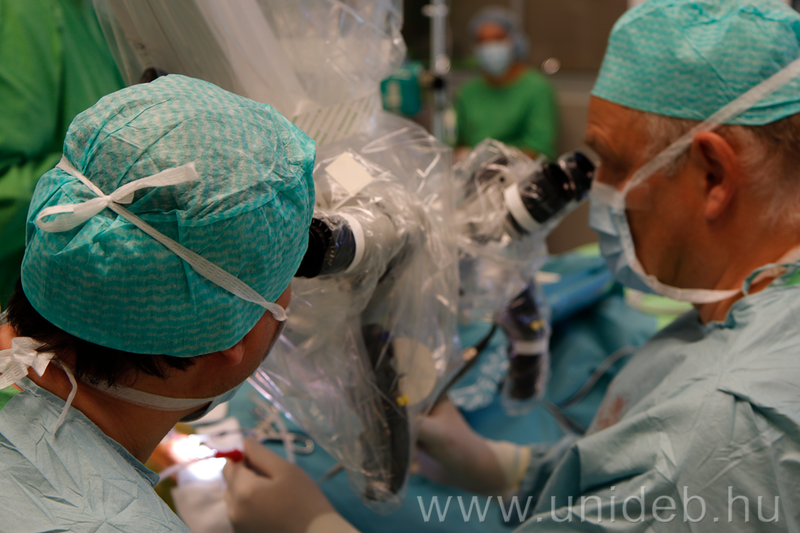 Oticon Medical's cochlear implants are mainly used in Hungary at the University of Debrecen. These are the smallest implants of this type in the world.

- With this implant, it is not necessary to make a bone bed as deep as for other similar devices, because it is attached to the skull with a special solution: using a screw. In addition, it is important that it is made of a high-strength material, so it is unlikely to be damaged during use. Another special feature is the speech production mechanism of the speech processor, which provides a very clean and special speech experience, thus effectively helping patients learn to speak - explained Arnold Nuber, Managing Director of the distributor Mediszintech Audiológia Kft.

The patient can live a full life with the implant; even learn a foreign language or music. The procedure does not depend on age; however, an intact inner ear is an important condition. An implant costs 5 million forints, the full cost of the surgery is financed by social security. The Debrecen clinic performs 15 such surgeries a year.

The director of the institution, Judit Szilvássy, has been working in the field of cochlear implantations since 1995, and has studied at several universities. She obtained his PhD in this subject at the Medical University of Szeged and defended her habilitation at the University of Debrecen in 2013.

Rector's recognition to the Polish professor

Rector Zoltán Szilvássy recognized the work of Krzysztof Morawski and his outstanding professional contribution to the work of the institution with the most prestigious award of the University of Debrecen. The university leader awarded the Polish professor with the PRO UNIVERSITATE DEBRECENIENSI 2000 award. 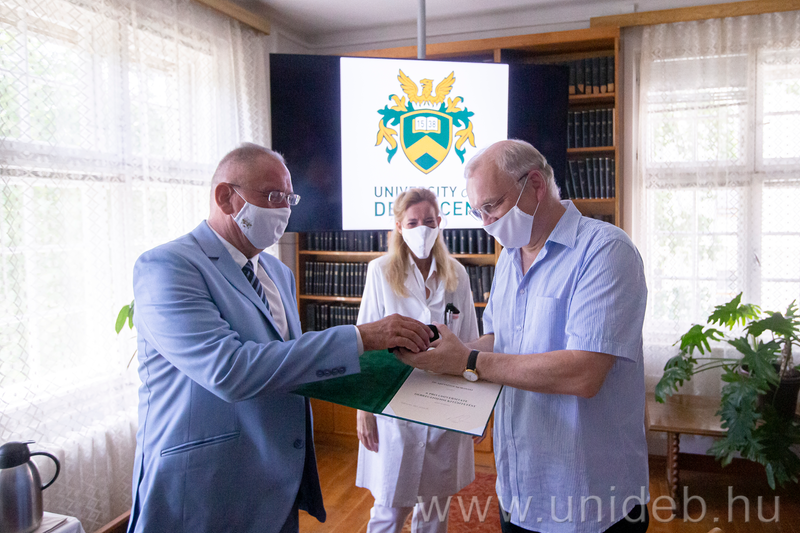 The cochlear implant program is very special, as we can “replace” a sensory organ with a device. Professor Krzysztof Morawski continuously supports the work at the Department of Otorhinolaryngology and Head and Neck Surgery of the University of Debrecen with his special surgical technique, outstanding surgical knowledge, professional practice and experience. We hope that the specialists of the institution will master as much as possible of his expertise - emphasized Rector Zoltán Szilvássy.

Currently, there is extensive and successful cooperation in the field of cochlear implantation, but, according to plans, the joint work with Polish specialists will soon continue with the placement of brainstem implants and the involvement of neurosurgeons.