The Foundation Stone of the Tennis Centre has been laid

The new Sports Business & Management and Tennis Centre is supposed to be completed next spring at the Böszörményi campus of the University of Debrecen. The facility serves sports and educational purposes. The foundation stone of the 860 million HUF worth centre was laid on Thursday.

The idea of the sport centre came up more than 2 years ago, in early 2016, at meetings of the city and the university managements. Following civil initiatives, Mayor László Papp suggested that the centre should be located at the university campus. As a result of impact studies and survey work, a decision was made to build the centre next to the arena at the Böszörményi campus. 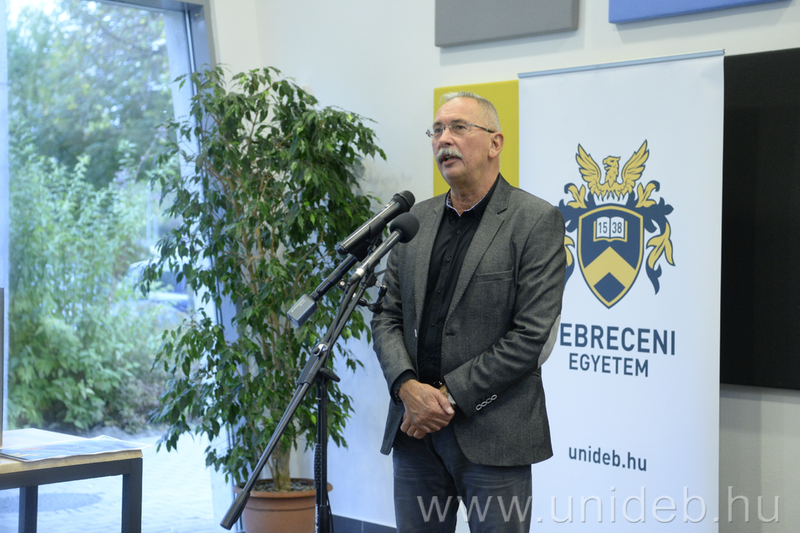 - Besides being in line with the third mission of the university, the tennis centre also represents the success of the cooperation of the city, the university and the developers – said Rector Zoltán Szilvássy.

Mayor László Papp highlighted that in terms of sports-related developments, the university has taken over the leading role from the city, which resulted in the development of outstanding facilities in the past years that, in addition to university students and staff, serve the community as well. 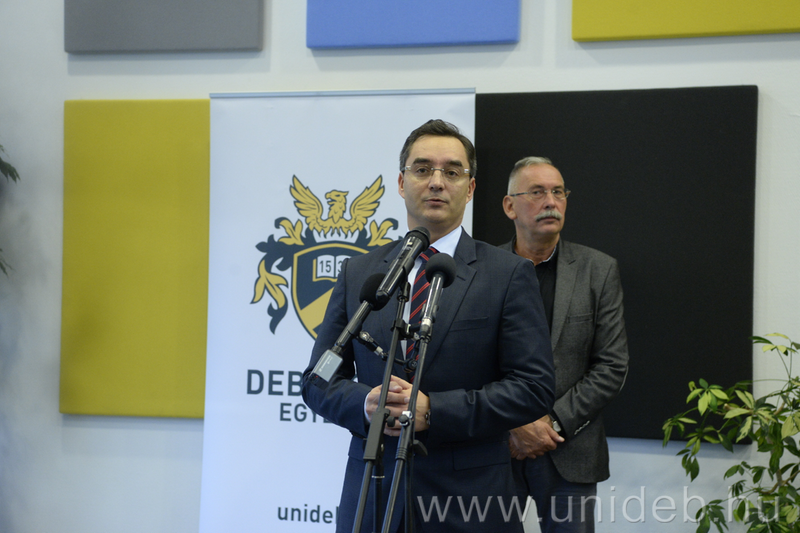 - It is fantastic that we are thinking about the future of the city together. Such a facility serves not only the purposes of the students and staff of the university, but also meets the needs of the community. The capabilities and attitude of UD are unique in Hungarian higher education in terms of sports infrastructures, not to mention the fact that the university integrates sports with education – added the mayor.

The building will consist of two units connected to the existing arena. The 3-storey educational part will mainly serve the purposes of the Faculty of Economics and Business. In addition to classrooms and meeting rooms, the offices of the Department of Sport Business and Management will also be located here. The tennis hall will include four standard-sized, hard-surfaced courts. 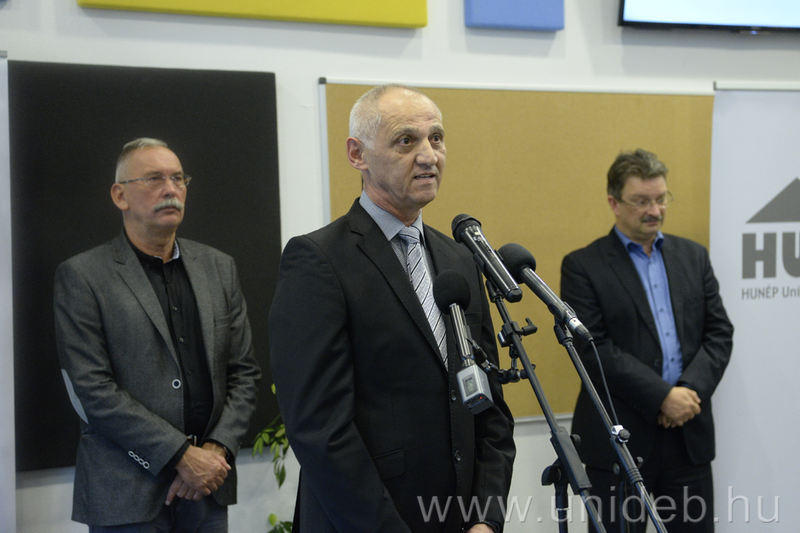 - Sports-related education, research and development at one of the largest faculties of UD in terms of the number of students started in 2012. Today 350-400 students attend the academic programmes. As the number of applicants is constantly rising, we find it important to provide the best possible environment and infrastructure for the transfer of knowledge – explained dean Károly Pető.

The 860 million HUF budget of the development comes mostly from the resources of the university, with the government covering 31 percent of the costs. The contribution of the Faculty of Economic and Business to the project is about 200 million HUF. 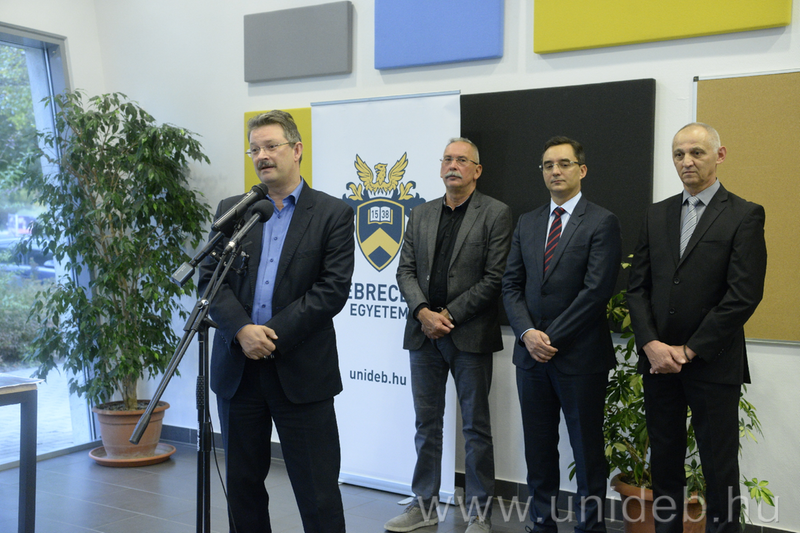 - After seven years of efforts, sports science education started 6 years ago. Today, UD is an institution to reckon with when it comes to sports sciences. The fact that a faculty can contribute to an investment shows that it operates efficiently – said Zoltán Bács chancellor. 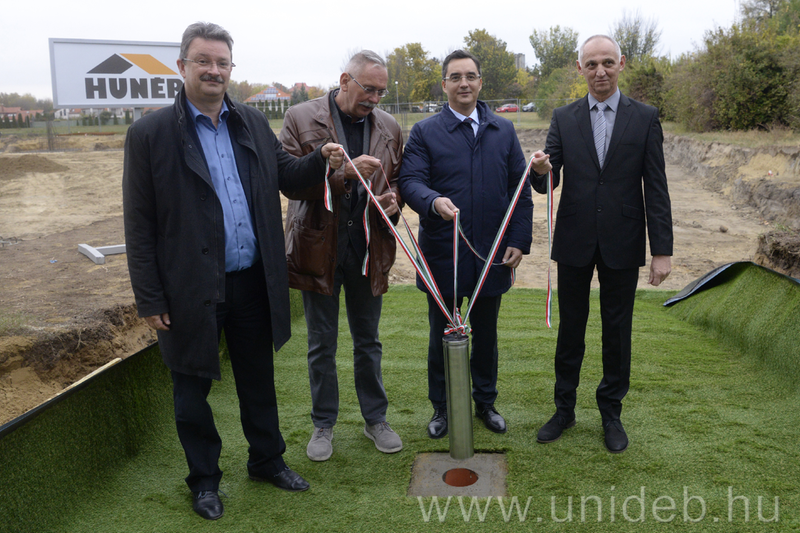 Following the ceremonial speeches, the foundation stone of the new facility was laid. 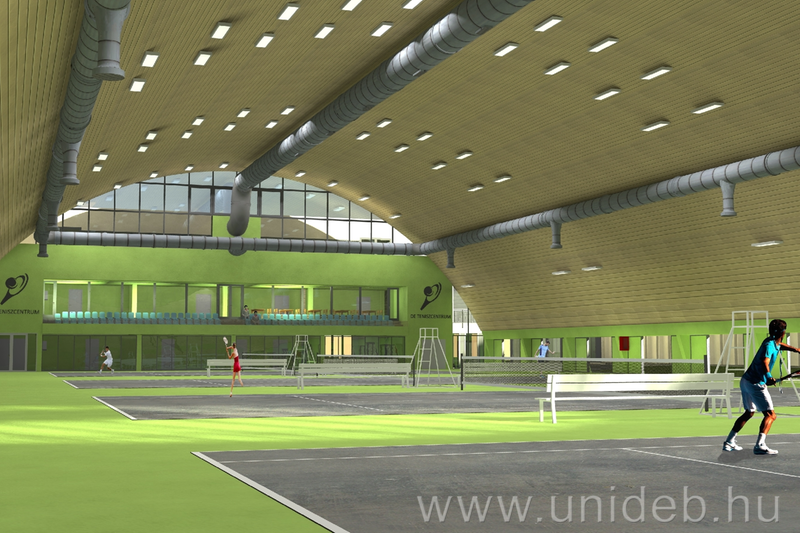 The centre is expected to be completed next spring, and will also provide space for mobile badminton courts. The 8 outdoor tennis courts will be installed later. The facility will also be used as a venue for large-scale events, such as the Farmer Expo, which has been organised at the Böszörményi campus for years. 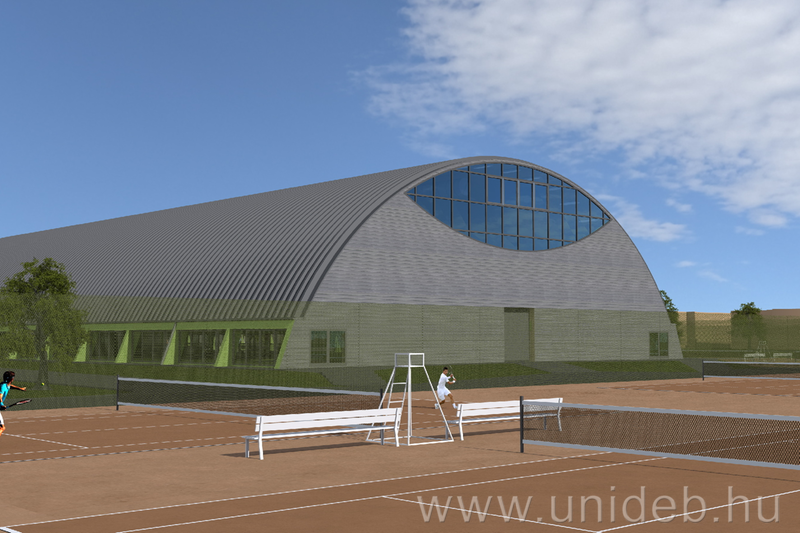 The facility was designed by KATERV Kft., and the construction works are being executed by HUNÉP Universal Zrt. and Globál Sport Kft.